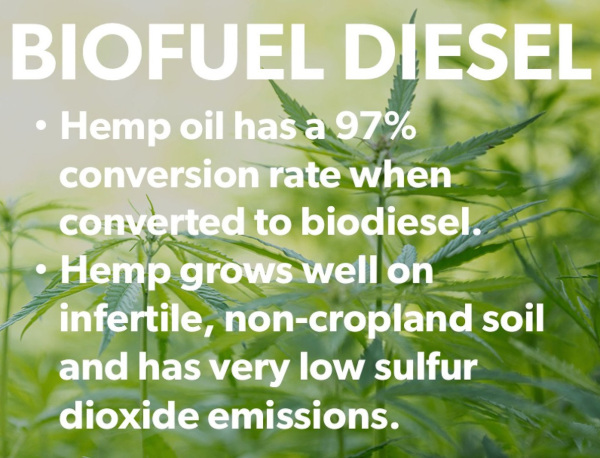 Seeds from cannabis sativa, or industrial hemp, can be used to create a viable, sustainable diesel fuel. One researcher stated that most hemp farmers today probably produce enough hemp to create enough fuel to power their entire farm. Now, with this harvested crop producers can make two varieties of biofuel:

Hemp biodiesel is made from hemp seed oil and can be used in any conventional diesel engine. Research showed hemp oil had a 97% conversion rate into biodiesel and passed all lab tests. Imagine a fleet of transport trucks powered by fuel made by a plant which left the soil in better condition than it found it.

Meanwhile, the rest of the plant can be used to produce ethanol or methanol. Sometimes referred to as “hempanol” or “hempoline” this type of fuel is made through a process called cellulolysis which ferments and distills the hemp to extract ethanol. Methanol, on the other hand, is produced from the woody pulp matter in the stalks of plants. Creating methanol from hemp is done through a process of dry distillation.

Advantages and Disadvantages of Hemp Biofuels
As a carbon neutral resource, the plant ingests carbon dioxide (CO2) very quickly, even faster than trees. Plus, carbon dioxide emissions from biodiesel is reabsorbed through the process of photosynthesis in plants. So, in addition to pulling toxins from the soil, the hemp plant can essentially “scrub” CO2 from the air we breathe.

When growing hemp, it returns about 70% of its required nutrients back into the soil, which means this crop requires much less fertilizer to grow. Less fertilizers means cleaner water supplies.

Creating a renewable resource crop which can restore the soil to health, pull toxins from the ground, air and water, while creating a viable energy source may sound like the American Farmer’s dream come true, however, it doesn’t come without its own set of challenges.

Disadvantages
Unfortunately, hemp production in the United States declined rapidly with a growing demand for synthetic fiber, and then the Marijuana Tax Act of 1937 added to the villainous reputation of cannabis sativa. Although the Farm Bill of 2014 allows the industrial crop today, the infrastructure for producing hemp biofuels is not yet established. This creates a major hurdle to overcome.

Additionally, because hemp can grow virtually anywhere, some worry about the deforestation already occurring in some parts of the world for other feedstocks. Could hemp and the pursuit of fuel, cause further damage to habitat as humans look for new places to grow the crop?

A Greener Future is Possible 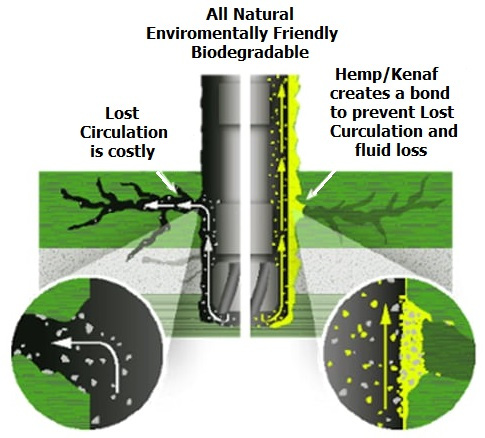 TEXSTRAND™ Lost circulation material (LCM) refers to additives introduced to the drilling fluid when there are signs of inadvertent returns or the loss of drilling fluid into the formation. The material is generally fibrous or flaky in nature so that it will bridge over and seal zones where drilling fluid loss is occurring.

There is a lot of talk about the value and importance of lost circulation material, but so far, very little conversation about the kenaf and hemp alternative.

We understand how important lost circulation material or LCM as it is more commonly known, is to the oil industry. Therefore, we have developed a propriety product that offers a clean, environmentally friendly solution to oil leakage that is manufacturer using kenaf as the primary ingredient.

Hemp and Kenaf are insoluble in water, non-toxic, biodegradable drilling fluid additive used in oilfield drilling applications. It acts as a borehole stabilizer, a lubricating agent, as well as preventing differential sticking.

The product is a mixture of micronized organic cellulose fibers and provides excellent seepage and lost circulation control.